The three images which make up this entry are essentially the same subject but in terms of their composition are all quite different. Through this post I want to illustrate the decisions we have to make each time we make a photograph and what we can learn from the process. 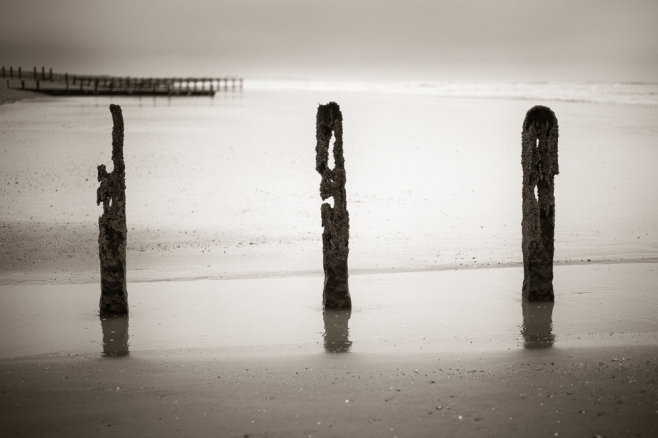 The first image above, uses a classical 3:2 aspect ratio….the same as any 35mm film or full frame sensor. The composition is balanced with three groynes, with the one in the centre arguably being the most visually interesting. The distant and out of focus groynes on the horizons provide both context to the location but also depth. I think it’s important to have retained separation between the left hand groyne and those in the distance. 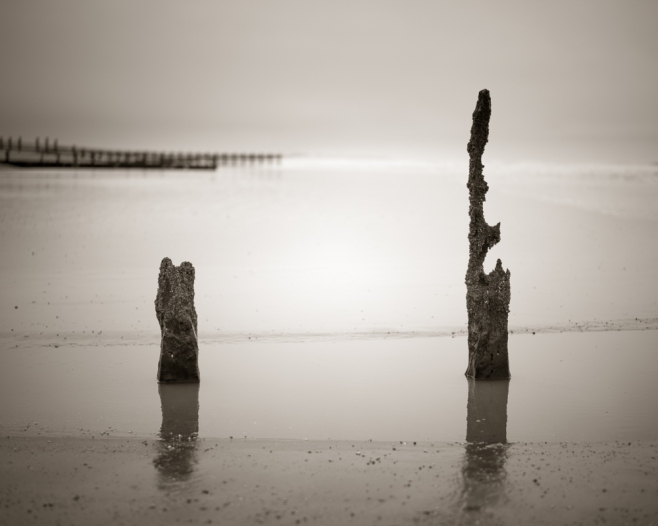 The second image shares the same elements but is further simplified as only two groynes are included in the frame. The distant groynes are a more important third element in this picture, creating a triangle with the groynes. There is added space between them and the much shorter groyne on the left hand side, which gives a more open feel to the shot. The aspect ratio is now 5:4, the equivalent of a medium or large format film camera.

And finally the third image. The single groyne fills more of the frame and is clearly the main focal point. The distant groynes are less intrusive but still play a key role in providing context and depth. The 1:1 or square aspect ratio, is one I particular like and lends itself well to this more minimalist composition. This aspect ratio mimics the 6:6 medium format ratio found in the classic Hassleblad 500 series of cameras.

So do I have a preference as to which image I enjoy the most? The first picture is too busy for my liking. Increasingly I find myself drawn to simpler compositions. The second image has a little more tension as the three elements form a triangle and I like the fact that one of the groynes is much shorter than the other which adds visual interest and feeling of openness. The third image is simpler still, but might be even stronger if the distant groynes were not in the frame.

It doesn’t really matter which image you or I prefer, although I would welcome your comments. What I wanted to demonstrate is how a relatively simple subject can be treated in different ways. What do you include and what is better left out? Your choice of aspect ratio and how this can impact on the end result. How simple or complicated do you want the composition to be?

For all these reasons it makes sense to me to truly explore or work a location and subject. Look around, consider the visual relationships between all the elements in the frame and at the same time think about a variety of aspect ratios and how these may improve the final image.

11 Responses to “How many elements + which aspect ratio = different results”