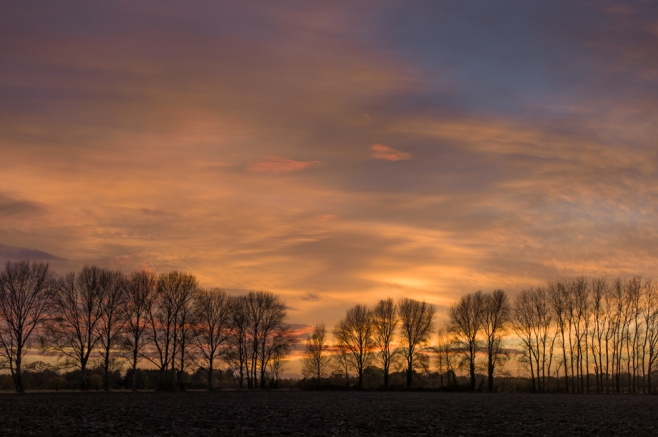 This line of trees appeared in my last post ‘Just before the dark’ and I decided to return to the same place a couple of days ago as the late afternoon light and cloud formations suggested the possibility of a colourful sunset. As you can see from these three pictures I was not to be disappointed.

Sunsets are such a popular subject for photographs and it’s easy to understand why. In fact its something of a cliche, but the sheer variety of colours on display is nature at its best, so it’s very hard to resist getting out the camera and releasing the shutter a few times.

The most dramatic skies often appear just after the sun has dipped below the horizon. By this time there is less chance of a blown out area in the frame, as the sensor struggles to cope with the dynamic range of the scene.  The light though was fading fast, so a monopod or tripod helps, but both are clumsy items to have with you on a dog walk, so these shots were all handheld. I left the aperture nearly wide open as I wasn’t too worried about depth of field as there was nothing in the foreground which needed to be sharp.

A photographic cliche perhaps, but beautiful all the same.

Do click on any image to view a larger version which will open in a new window.