I like to be creative. I like to make an image, not just take a shot. I like to revisit frames taken a while ago, and sometimes I like to reprocess a shot because the first time round it didn’t really work out as I would have wanted…… and finally I like to be honest with myself and the viewer as to how the photograph was made. All of this requires a little more explanation.

Let me start at the beginning. Taking a picture with a camera is simply the starting point. For some it is both the start and the finish, as they want a record of what they saw, pure and simple. If however your photography is about creating or making a pleasing image, then capturing what you saw at the time can only be the beginning. How the picture is processed will be personal to you and will be done in such a way that hopefully expresses how you felt and what you want the image to ‘say’ to the viewer.

This is certainly my approach and the above photograph is I think a good example. It’s one I took many months ago and I processed a number of similar shots taken at different times but was never particularly happy with the outcome. Here is one such example:

A few days ago I was going back through my Lightroom library and came across a frame which I liked and I soon realised that in order to achieve the look I had been after the image needed to be inverted. I don’t know why I didn’t think of it before. I cropped the frame and darkened the bottom of the picture so there was no detail in the bank. A few further adjustments to levels, contrast and a small amount of localised dodging and burning and the image was made.

I have not used any special filters in Photoshop or other manipulative software to alter the original file – and that’s how I like things to be. Capturing the reflection of the trees  and the movement of the water, is just how it was. Nature itself has created this effect and that’s important to me in my photography.

Here is another ‘reflection’ image which also benefited from being inverted. 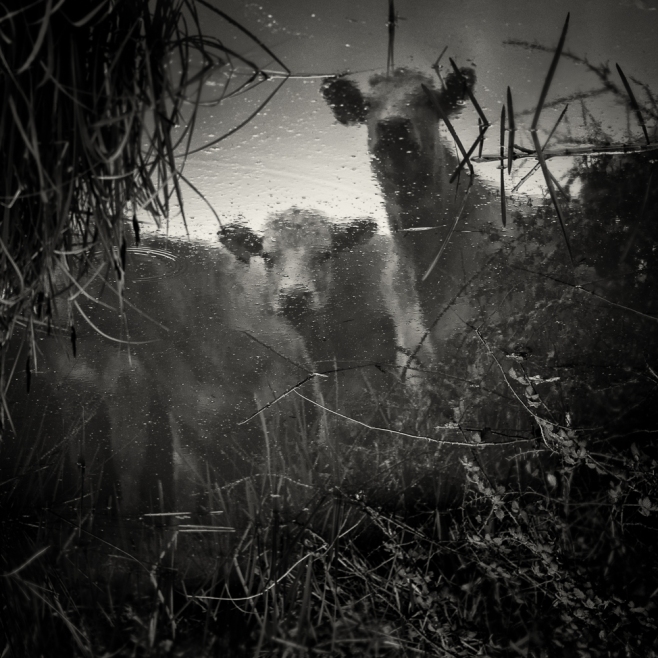 ‘The Cattle Trough’ I am always attracted to the ordinary in a rural landscape, some might say the mundane, but I like to photograph this type of scene which others might walk on by. #rural #landscape #westsussex #southdownsnationalpark #inthecountryside #chalkpath #winter #monochrome #bnwmood #blackandwhitephotography #cattletrough
I have hardly pressed the shutter in the past six months. I hope that 2020 will bring a much needed change to my image making. There have been reasons of course but for now I am enjoying trawling through the archives seeking fresh inspiration. This view of the River Arun at South Stoke was taken nearly 7 years ago to the day. A favourite location in the South Downs National Park. #landscapephotography #river #arun #winter #square #outdoors #reflections #trees #westsussex #southdowns #nationalpark #monochrome #bnwcapture #olympusem5
‘Inspiring Light’. Sometimes I find these light rays quite inspiring. Leading the way. A light from above. #light #woodland #dorset #inspiration #landscapephotography #monochrome #leadingtheway #bnwmood #blackandwhite #lovedorset
‘Hedge Lines’. Delighted this photograph will be finding its way to a new home next week. Part of The House at Hill Lane exhibition which is on this weekend 10-5 Sat and Sun. Fine selection of artworks on sale by @pollymeynelltextiles @edjohnsonstudio @anngardnerpaintings and @fancanpot. Do come along if you can. #popupexhibition #fineart #textileart #ceramics #furnituremaker #photography #workforsale
All hung and ready for the Private View this evening at #thehouseathilllane in #Barnham with three Open House Days - Fri to Sun 10-5pm. Hosted by @pollymeynelltextiles together with @edjohnsonstudio and #fannypeppercorn. Looking forward to the doors opening at 6pm. delighted to have work displayed with some truly talented artists.
At the end of the afternoon dog walk I briefly turned round and was delighted to have done so. I was greeted with a truly beautiful sky - the last light of another day. #landscape #beautifulsky #outwiththedog #fishbourne #meadows #westsussex #lastlightoftheday
Follow alan frost photography on WordPress.com