Shortly after I acquired my Leica M Monochrom, I became aware of an issue relating to the CCD sensor; not only to this camera but also the M9 and the ME. The problem was one of corrosion on the sensor which could manifest itself at any time. Leica was quick to respond to this news when it broke a few years ago and guaranteed that for the lifetime of the camera a faulty sensor would be replaced. In fact they went further and said that even if a sensor was replaced the guarantee would apply to the new sensor as well.

This is old news really, but aware of the issue I have always been on the lookout for the problem. The good news being that I had comfort in knowing that if ever I discovered any sign of corrosion, the camera could and would be repaired at no cost. But I would of course have to suffer the inconvenience of being without the camera for several weeks as the work can only be undertaken by Leica in Germany.

When processing the above image of ‘Clouds over Prinsted’ I was cleaning the picture for sensor spots and noticed a number of marks which were not typical of dust on the sensor. In fact they were more like ‘flying saucers’ – a dark spot with a light and dark halo. (See the screen grab below of the offending article – just above the tree line). 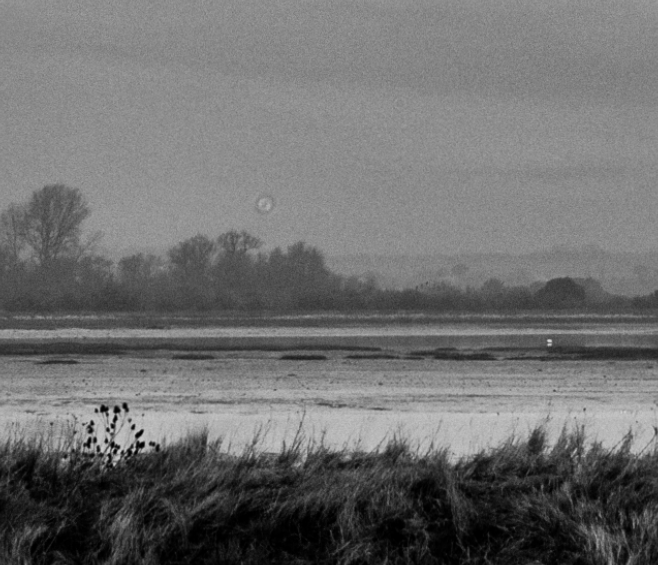 The mark on the sensor which is almost certainly the sign of the corrosion issue.

Fearing the worst I did some research which only confirmed that the dreaded ‘corrosion on the sensor’ issue had finally reared its ugly head. Yes, I could clone out the marks, but assuming the  corrosion might spread the camera would have to be repaired. Bad News!

I rang the Leica Store in Mayfair in London and they said that whilst the camera could be collected by courier, if I took the camera in personally, they would provide me with a loan M Monochrom for the duration of the repair at no cost. They informed me the turn round time would be approximately six weeks. Having access to a replacement camera was Great News! I would have it for my planned trip to Pembrokeshire in Wales which comes up shortly and by the time I travel to Scotland the repair should have been carried out and my Monochrom would be back in my hands.

So yesterday I caught the train up to London, swapped cameras at The Leica Store in Mayfair and took the opportunity to visit Tate Modern, specifically to see The Radical Eye exhibition. A superb collection of photographs owned by Sir Elton John. I will write about this exhibition in a future post. All I would say is that if you can get to London do go – it continues until 21st May 2017.