Ever since my photographic style turned away from colour and into black and white, I have been curious to know more about a camera which only takes monochrome images – that camera is the Leica M Monochrom and was announced in May 2012. Ever since its release I have read numerous reviews and downloaded some DNG files just to see what all the fuss was about.

As my appreciation for black and white photography has grown, together with my knowledge of this particular art form, my understanding of the Monochrom and what it might offer has also expanded. So earlier this year I went up to the Leica Akademie in Mayfair for a ‘test drive’ of both the M240 and the M Mononchrom. You can read about my experience and first thoughts here. 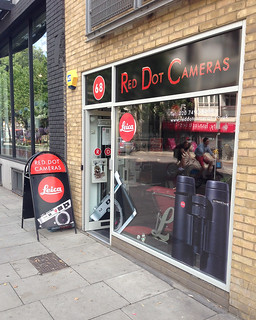 After many weeks of agonising; should I or shouldn’t I?…..my mind was made up when I came across a second hand Monochrom in virtually mint condition being sold by Red Dot Cameras, a specialist Leica dealer situated in Old Street, London. It only had 1,100 actuations and the saving in cost over a new one was quite considerable. I travelled up to the City and returned later in the day with the camera and two lenses – a Leica 50mm Summilux f1.4 ASPH – M (6 bit) and a 28mm Elmarit F2.8 ASPH (6 bit). I also bought a spare battery and a second hand ‘Thumbs Up’ grip which already had a lovely patina.

Having read so much about the M Monochrom I am already aware that this rangefinder camera and its manual focus lenses will take time to master, but with patience and much practice, coupled with my desire to improve my photography, the learning experience should prove worthwhile. Only time will tell.

I took a few test shots in and around the house but last weekend I finally had the opportunity to go out with the camera to see how I would get on. The late afternoon light was excellent so I drove to Kingley Vale Nature Reserve which forms part of the South Downs National Park.

I decided to restrict myself to the use of just one lens – the 50mm Summilux. I did though take a 3 stop ND filter, which would allow me to shoot wide open in the bright light. I also set the exposure compensation to -2/3rds, in the hope that this would prevent any blown highlights, particularly given the lighting conditions.

Here are a selection of the images taken that afternoon. They have all been processed in Lightroom 5 and some have been further worked in Silver Efex Pro2. They may not be the best shots I have ever taken but for a first try I am delighted with the results. Already I am convinced my decision to buy the Leica M Monochrom was the right one. I just ask myself why I took so long to make up my mind?

This is definitely not a review but I will just say that the files it produces are astounding in their detail and tonality. They are very malleable in post processing and  I guess are everything I expected them to be from all the reviews I had read, only more so.

The Leica M Monochrom is a very niche and specialist camera – and my photographic journey in black and white continues!