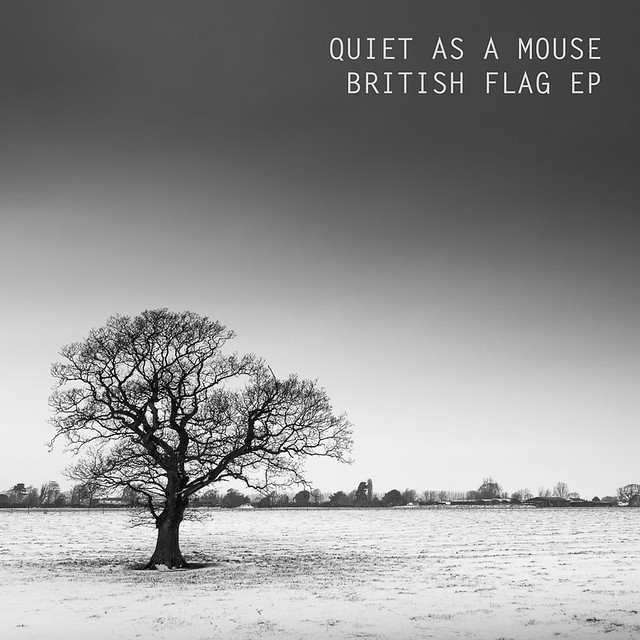 At the beginning of June I received an email from Alex Moran, a singer and songwriter, on behalf of his emerging Indie Rock Band – Quiet as a Mouse – who are based in Edinburgh, Scotland and were formed in 2012. He was enquiring as to whether or not they could use one of my images for their first EP which was to be released later in the year. It already had the title – British Flag. Needless to say I was very pleased to have been approached.

Over a period of a few weeks there was an exchange of emails between us and I am delighted they chose one of my images – ‘Tree in field of snow’ – as the cover for their EP which was released earlier this month on 11th August. It has four tracks and based on some of the reviews they have already received for their earlier work, it looks as though it’s going to be a great success and I wish them every luck in the future. Here are just a couple of reviews lifted from their website.

“Quiet as a Mouse are fast becoming one of Scotland’s hottest prospects…’Home Is The Hardest Place To Find’ is a soaring anthem packed full of melody…it reminds me of Snow Patrol’s edgier moments.”
The Daily Record:
“Some bands don’t even achieve such a great track as ‘An Accident Waiting To Happen (Awoo Woo Woo)’ let alone give it away for free. It’s a contender for Scottish single of the year”
“There is enough in Alex Moran’s band’s armoury to sink a battleship…New single Casketcase is a heady mix of Weezer and Nirvana, its Goth for the new millennium…I love this band.”