A further selection of images taken in and around my home. All square and all in monochrome. Today’s selection are all about light and shadows.

END_OF_DOCUMENT_TOKEN_TO_BE_REPLACED

It’s a Bank Holiday weekend in the UK. Unusually the sun is shining brightly, it’s pretty hot and quite rightly people are giving themselves permission to relax and enjoy themselves – and why not?!

In a complete break from my usual style, I too have been playing – just processing an image in a rather exaggerated way purely for the fun of it. High on contrast, lots of grain, blue toned, rotated through 90 degrees and a fancy border as well.

I think it’s important to do something different once in a while. Creative freedom can lead to unexpected results. Nothing too serious but good to inject a change of tack – after all ‘variety is the spice of life’.

For the record I took this shot yesterday at The Arundel Festival. There were huge numbers of people around; the main roads in the town had been closed to traffic, and tables and chairs were everywhere to cater for the thirsty and the hungry.

Have fun whatever you choose to do this Bank Holiday.

I am rather impatient when it comes to processing a SD card full of images. I get home, download them into Lightroom and with luck a number will jump out at me and the processing begins. More often than not these are the pictures which I remember taking and I simply can’t wait to see whether or not I have captured something I like.

I have been told that it can be beneficial to do nothing with a card of images, just download them and then leave them to mature for a good while, perhaps six months or more, before taking a more in depth look at what you shot on the day. Given the passage of time you no longer remember all the shots that were taken, and images which might have been written off on first viewing are in fact worthy of consideration. Perhaps a different or new processing technique will reveal an image which works after several months but might not have done had it been processed within hours of the shutter being released.

‘Downhill shopper’ is one such picture. It was the third shot I took in the lovely city of Bath on the ABC of Camerawork workshop with Andy Beel at the beginning of November last year. Whilst I can recall taking the picture it didn’t say much to me at the time, but a year on and given a high contrast and grainy look to the photograph, I now think it’s worthy of sharing on my blog. There is little or no detail, just outlines of backlit figures, long shadows and the knowledge that you are looking at a busy street scene of shoppers. The rest is down to your imagination. The elderly lady and what appear to be ski poles, give the image its title.

Here is a link to the entry about my day in Bath with Andy Beel.

ABC of Camerawork course with Andy Beel in Bath 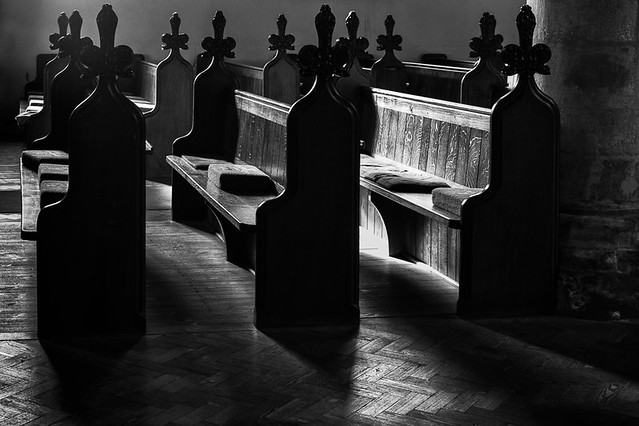 Pews of Light
The interior of Weybourne Church. The low morning light shined through the tall leaded light windows on the far wall and illuminated the church pews and cushions.

There is something rather special, well at least for me anyway, about the light which can be found inside a church. This is particularly true when the sun is shining brightly and it comes through the leaded light windows, making shadows and highlighting certain features inside a place of prayer and contemplation.

This post features three photographs taken recently in Norfolk, which I think capture something of the magical light to be found inside these religious buildings. They are centuries old, yet in many respects are no different to when they were first constructed. The idea that this special light has been witnessed by so many generations is rather humbling.