During a recent visit to Northumberland I visited Harthope Valley in The Cheviot Hills. It reminded me of Fay Godwin who is one of my favourite photographers. She was famed for her black and white photographs of the British Landscape as well as being a very fine portrait photographer.

Below is a short extract from an obituary published in The Daily Telegraph on May 30th 2005.

‘Fay Godwin, who died on Friday aged 74, was the foremost landscape photographer in Britain, and also collaborated with the poet Ted Hughes, going on to produce portraits of other writers; her insight into the British countryside, which led her to be compared with the great American photographer Ansel Adams, was also her recreation, and she was president of the Ramblers’ Association from 1987 until 1990.

Her photographs, which captured the differing moods and textures of moors, forests and country trails with a remarkable sensitivity and lack of sentimentality, were mostly produced in black and white, but with an extraordinary tonal range’. 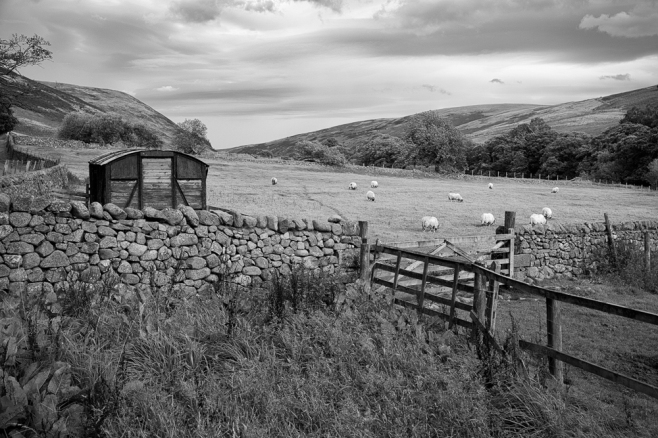 ‘Fay Godwin was one of the supreme exponents of that most English of obsessions, contemplation of the British landscape. As a landscape photographer she had no betters and few equals in a career stretching over 40 years. Her output was prodigious: thousands of images, all memorable and many sublime. Her photographic compass, in black and white until 1999, was narrow but superbly controlled and perfectly directed to her view of herself and her mission: “I’ve been called a Romantic photographer and I hate it. It sounds slushy and my work is not slushy. I’m a documentary photographer, my work is about reality, but that shouldn’t mean I can’t be creative.’

‘Godwin was fascinated by the antiquity of the land, by the traces which men and women had left behind them, manifested, in her early projects, by ancient roadways across the countryside.’

The article went on to say –

‘In 1976, Godwin’s photographs were included in the V&A’s exhibition The Land, selected by Bill Brandt in collaboration with the museum’s new curator of photographs, Mark Haworth-Booth. For the leading members of the emerging photo establishment, Godwin symbolised a new breed of landscape photographer, combining a challenge to sentimental pictorialism with a commitment to the rugged poetic possibilities of landscape photography. Her black-and-white fine prints repudiated the brightly coloured representations of Britain which had become so familiar in the post-war years. Here, they announced, is a landscape of mystery and imagination, of wild places, hard rocks and cold water, contradicting a view of Britain as a gentle idyll of thatched cottages, limpid streams and peaceful meadows. Godwin’s countryside was violent and forbidding, a lonely and magnificent place.’ 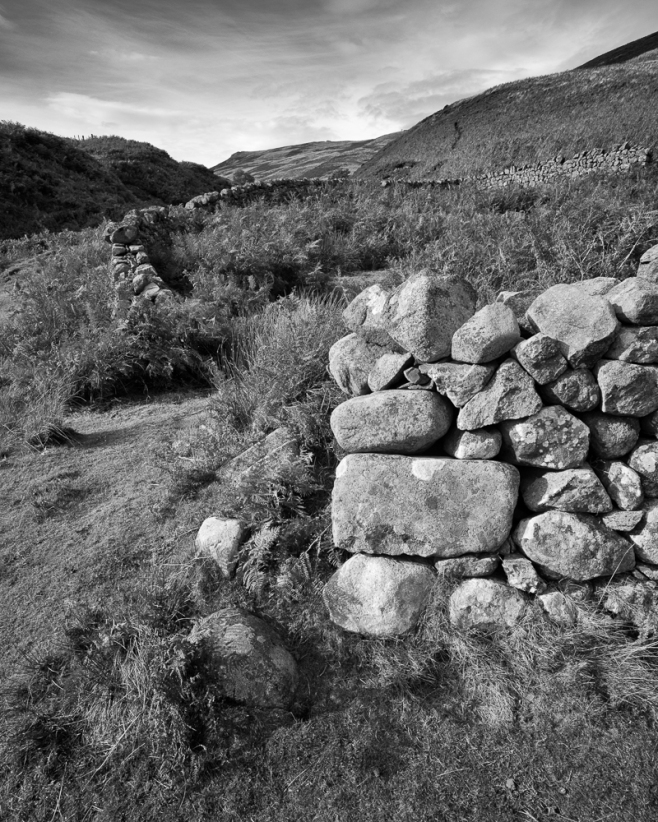 Harthope Valley is a rugged, remote and wild place yet there was still ample evidence of man’s impact on the landscape. The circular sheep stells which were built to provide shelter during harsh winters and are principally found in The Border’s region of England and Scotland. The enclosed sheep field and a farmers hut. The dry stone walls which line the valley road. The carpet of bracken and fir trees alongside the rocky stream. As I captured these images I could just imagine Fay Godwin rambling through The Cheviots with a camera in her hand.

When I compare these pictures with those for example in my last post depicting Dunstanburgh Castle there is to my eyes a stark difference in style. The images in this post are not trying to be ‘photographic art’; they simply record or document the landscape as I saw it. No long exposures to blur the sky and sea, just carefully composed and traditionally processed black and white images which I like to think have something to say about the location.

I ask myself whether or not I have a preference? I can argue a case for both styles and they give me equal pleasure in both the taking and the making. A stand alone long exposure photograph of Dunstanburgh Castle is perhaps more of an ‘attention grabber’, whilst a more conservative approach to the landscape may hold more limited appeal. Either way they do of course have one thing in common. This type of  location encourages me to get out and about. They inspire me to explore an area and soak up the atmosphere of the great outdoors. The photographs are a reminder of where I have been and the scenery I have been able to enjoy and witness first hand. In years to come it will not matter whether I am looking at a toned long exposure image of Dunstanburgh Castle or a more ‘Fay Godwin’ style image of a sheep stell in The Cheviots. Memories of both locations will come flooding back and to me that’s what really matters.

The quoted extracts from various obituaries about Fay Godwin can be read in full by clicking here.