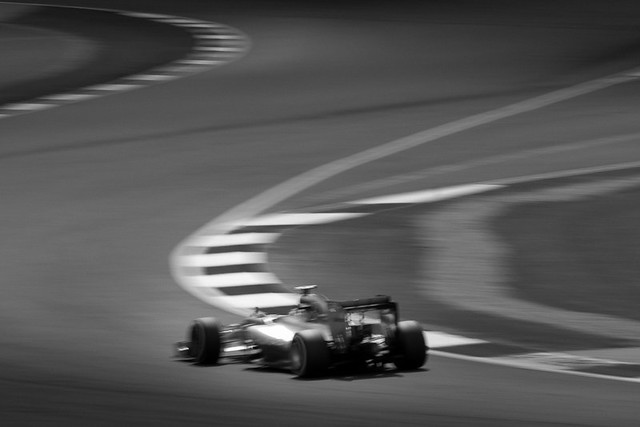 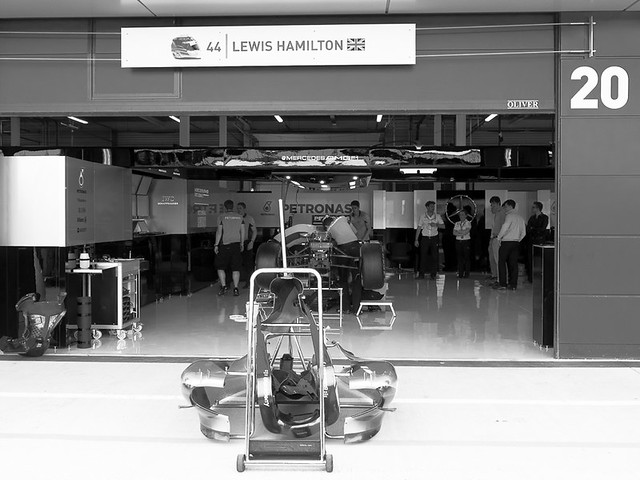 Race preparation
On Thursday we were able to walk through the pits, and see the garage crews preparing the cars for the Grand Prix.
Race practice would start the next day. 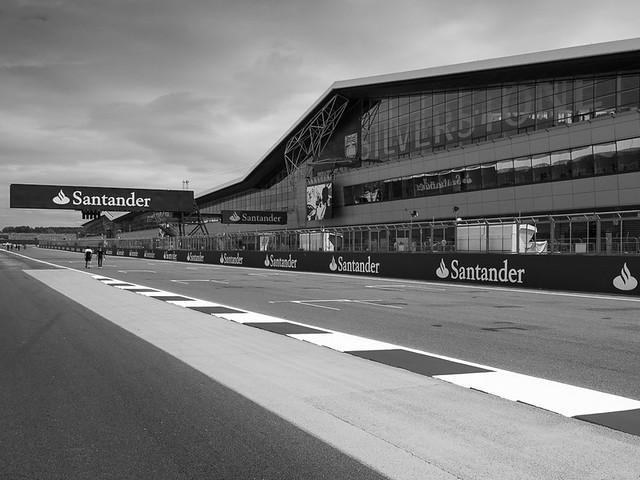 Starting grid
The new Silverstone stand overlooking the starting grid.
This was as close as we would ever get to the track but sadly there were no cars to be seen. 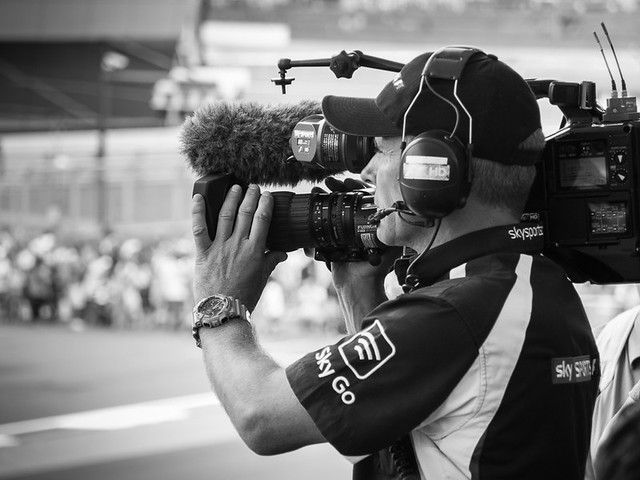 Sky coverage
TV cameras were everywhere at the British Grand Prix, recording the event so it could be broadcast around the globe. 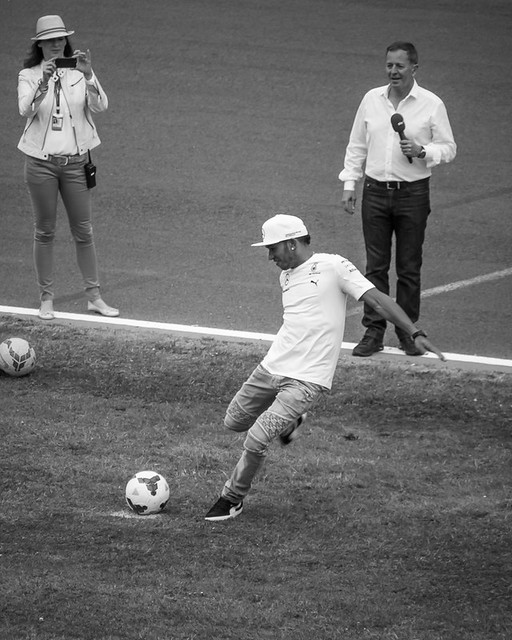 Lewis Hamilton getting to grips with a different sport.
Late on Thursday afternoon Sky Sports put on a show for the public in the main grandstand, including interviews with the drivers, who entertained the audience by trying to score a goal. Martin Brundle oversees the fun and games. 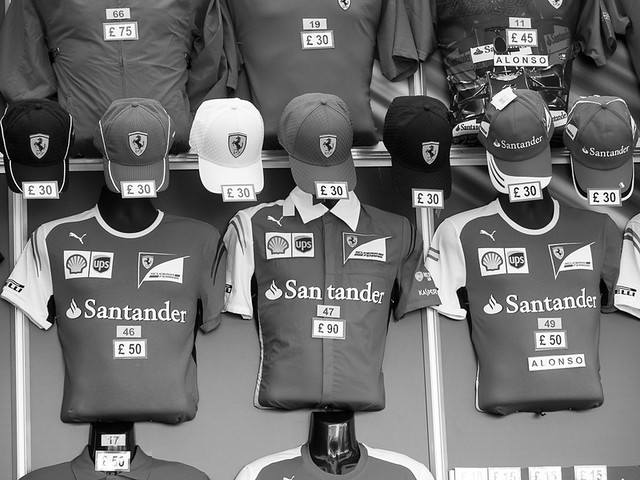 Ferrari merchandise for sale
These stalls or ‘cash converters’ were all round the circuit appealing to a fan base both young and old. 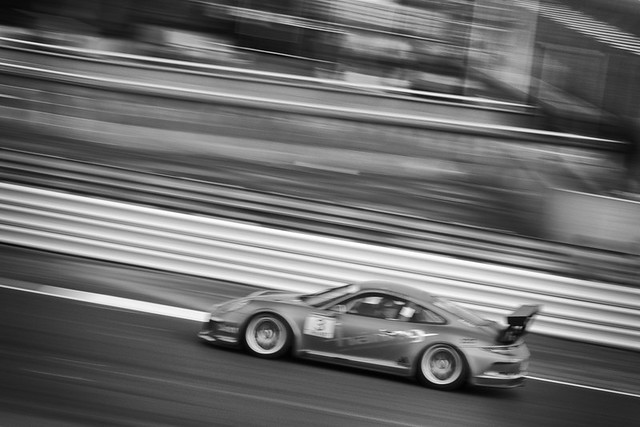 Porsche power
Taken during one of the practice sessions for the Porsche Supercup. 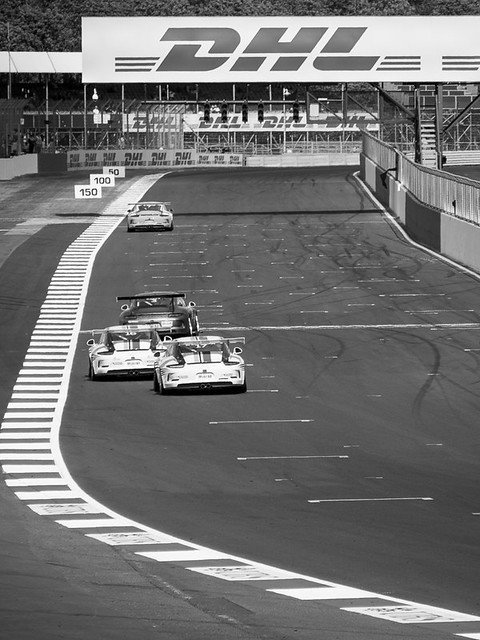 Chasing group
More action from the Porsche Supercup, from Woodcote  corner looking down the track towards Copse. 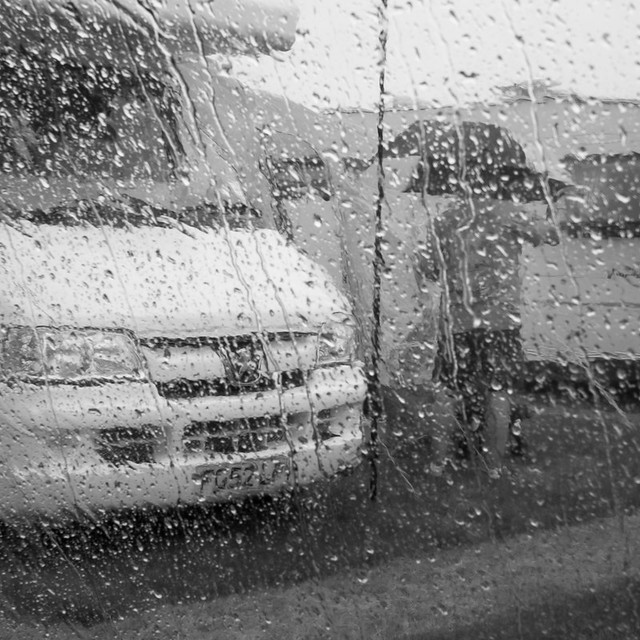 Campers in the rain.
Silverstone would not be the same without some rain falling on the camper vans, caravans and their occupants. 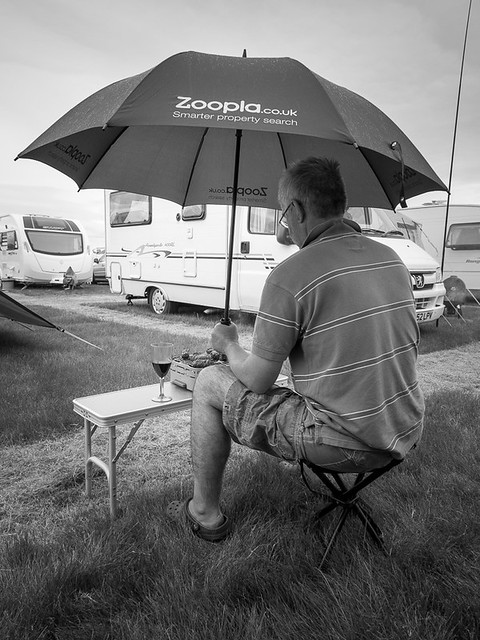 The barbecue must go on.
If a barbecue has been planned then whatever the weather it must happen – an umbrella and glass of wine always help in these circumstances! 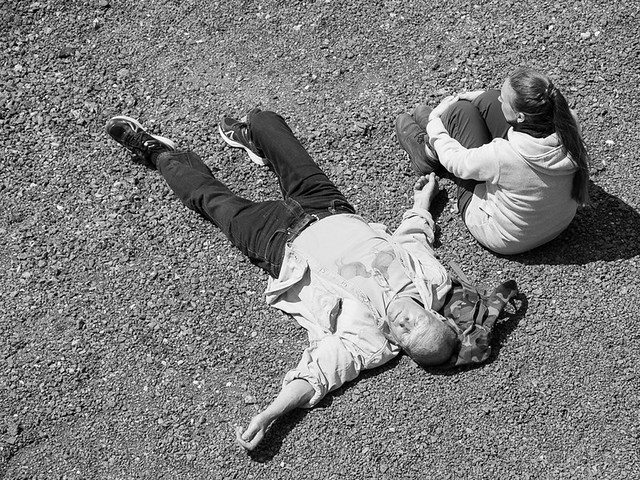 But the sun did shine
….and when it did, it was just too much for one spectator. I can imagine his partner saying –
‘Wake up you are missing all the action……and it was you that wanted to come!’ 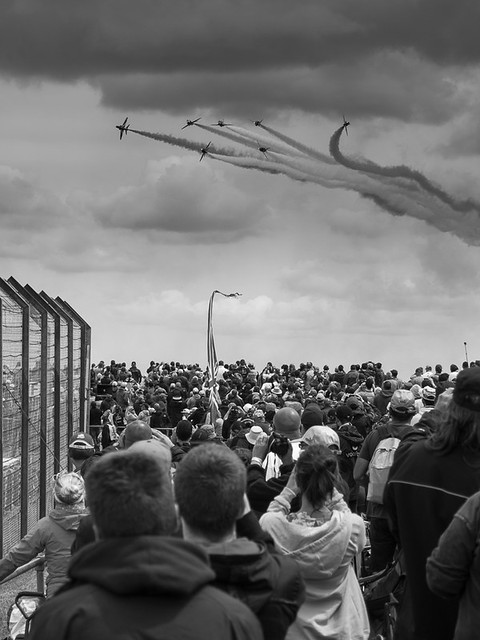 The Red Arrows.
The warm up act for the main event and they always arrive bang on time. A spectacular show as always. 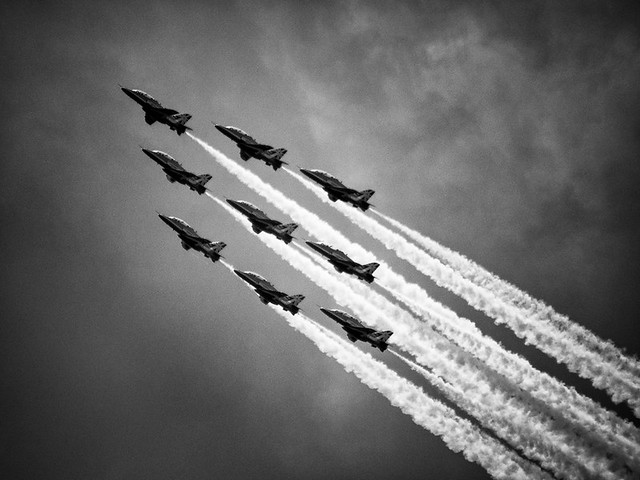 Red Arrows in their diamond formation. 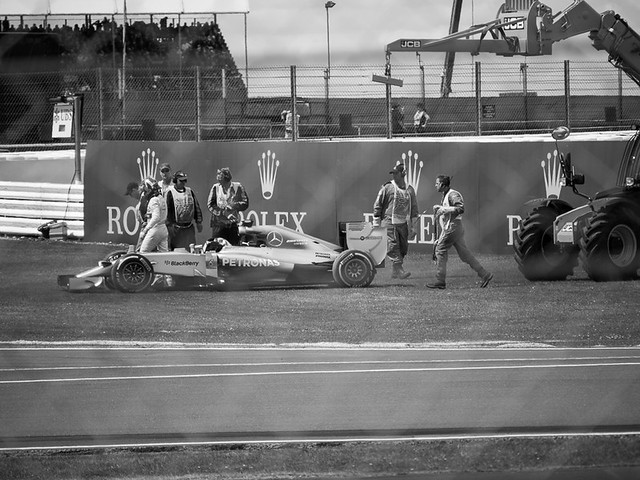 Rosberg’s retirement.
The moment when The Silver Arrow driven by Nico Rosberg came to halt on the grass as a result of gearbox problems.
A dsiconsolate Rosberg walks with his head held low away from the crowd, as the mobile crane moves in to lift the stricken car to a safer position. 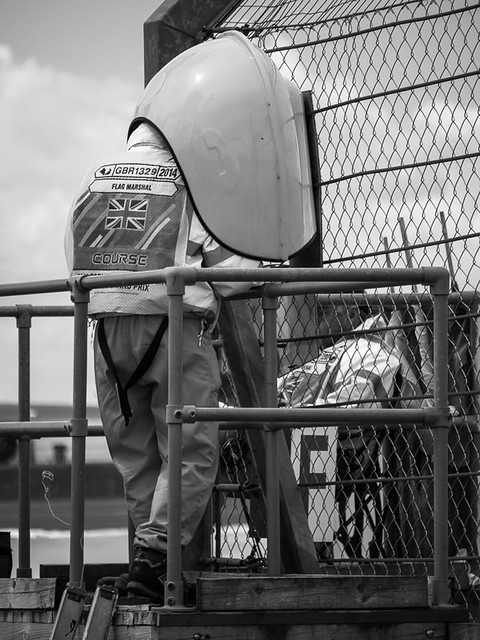 Course marshall
or an alternative title –
‘Does my head look big in this ?!’ 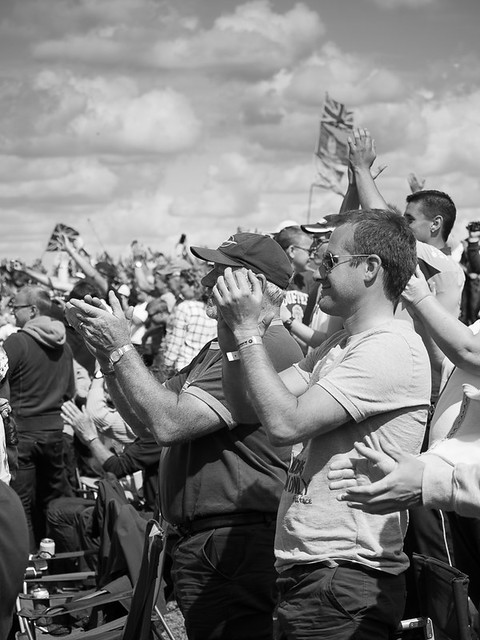 Celebrating the win.
The crowd applaud the victor – Lewis Hamilton

It was wonderful to witness such a great sporting event. Of course you don’t get to see all the action despite the huge TV screens, but there is nothing like being part of the event and not just sitting in your armchair at home. The crowds, the noise, the smells, the tangible excitement, in fact everything that you would hope for from a Grand Prix attended by tens of thousands of appreciate and well behaved fans.

I noticed this reflection of trees in the bonnet of my car as I returned from the afternoon dog walk. Hardly a traditional landscape but it certainly caught my eye. #trees #treesofinstagram #reflection #landscapeart #winter #iphonography #iphone #inverted #rpslandscape #abstractlandscape
I never cease to be amazed how well an iPhone can capture tricky lighting conditions. This is straight out of the camera so to speak with no processing apart from the square crop. #winter #rpslandscape #landscape #woodland #getoutside #dogwalking #dorset #iphonography #iphone #earlymorning
A beautiful cold and misty morning today out in Moreton Plantation. Dog walking certainly has its benefits otherwise I might have stayed in with another cup of coffee. So much better to be out and about. #rpslandscape #landscape #landscapephotography #woodland #mist #snapseed #iphonography #mist #mistymorning #inthewoods #dogwalking #dorset #getoutside
My first post of 2022 and a return to a favourite location - West Wittering beach. A very high tide, stormy sky and a strong wind combined - just love these conditions for photography. #seascape #coast #coastalwalk #stormyweather #hightide #rpslandscape #fujifilm #fujix100v #redflag #westsussex #outdoorphotography #picoftheday
In 2021 I changed tack and started making images in colour instead of black and white. I’ve not taken anything like the number of photographs this year compared to previous years, and I hope to put this right in 2022. For now here are my favourites from 2021. May I wish you all a very happy, healthy and peaceful New Year. #2021 #bestof2021 #favourites #landscape #landscapephotography #rpslandscape #fujifim #fujilove #fujixt3 #dorset #westsussex #lookingforward #happynewyear
It’s not an atypical festive image but whenever I find myself at the coast the experience is very calming. In these troubled and uncertain times being away from the crowds and being able to find your own quiet space is very rewarding. A time to reflect on the past and hopefully look forward to the future. Wherever you might be tomorrow I hope you can have a joyful Christmas. Thank you to all my followers for your likes and comments throughout the past year. #iphonography #coast #calm #space #quiet #awayfromthecrowds #seascape #square #reflection
Follow alan frost photography on WordPress.com