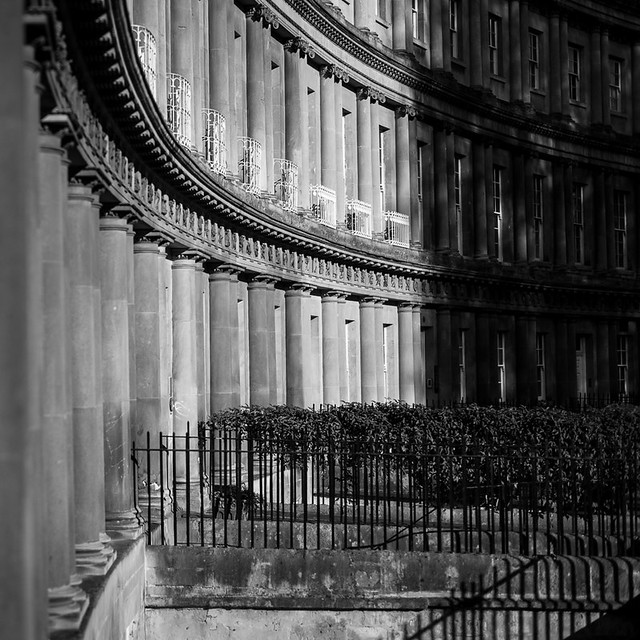 This time last week my wife and I took part in a photography workshop called the ABC of Camerawork which was run by Andy Beel FRPS, a Bristol based photographer who is renowned for his black and white photography. The course took place in the beautiful city of Bath in Somerset.

As well as my wife and I, there were four other particpants all from Dorchester Camera Club. We met up with Andy in the cafe above Waterstones bookshop in Milsom Street. Over coffee and a croissant he introduced himself and soon established our photographic abilities and what we would like to get out of the day. From my point of view I was keen to use depth of field in a more creative way.

Andy gave each of us a card to remind us of the ABC of Camerawork. There were three versions depending on our ability. Beginner, intermediate and advanced. The ABC included: A – for attraction, B – for background, C- for composition, and so on. I have to say this simple mnemonic did make me think more about what I was doing and why, although if I am honest I didn’t refer to the card as often as I should have done during the day. Nevertheless Andy kept reminding all of us of what we should be doing and gave hands on advice to all the participants. He never cramped our style and was always available for good practical advice. He encouraged us to experiment, take plenty of shots, try different settings, in other words to challenge our normal approach. He was a very good host.

Andy explained that we would be visiting various locations in and around the city which would hopefully provide a good variety of subjects to photograph.  To start with we headed towards The Circus and then onto the famous Royal Crescent. We walked through the streets lined with attractive buildings before stopping for lunch in an Italian Restaurant. During this break we swapped cameras to see what others had been shooting in the morning. Despite visiting the same locations, our eyes see things differently, so we all had a variety of shots. To me that’s the joy of photography. It’s applying your own personal vision of the scene or subject in front of you. No two photographs will ever be the same. Unfortunately time was marching on and the light was beginning to fade, so the sticky toffee pudding stayed in the kitchen.

In the morning we enjoyed bright sun, which isn’t always the best lighting for black and white photography. From my point of view I love shadows, so for me these lighting conditions worked in my favour. The afternoon was overcast so a different approach was required.

Andy is a Fellow of the Royal Photographic Society so I was keen to talk to him about how I might go about achieving an Associateship. He expressed his views but was keen to spend more time with me so that we could discuss the topic in more detail as he would like to see examples of my printed work. I have already confirmed a place for Andy’s ‘Monochrome Masterclass’ in March and I may well arrange a 121 with him before then so that I can benefit from some personal tuition.

All in all an excellent day and a week later I have processed a number of the files which I have included in this post. Andy requested that we send him some images which hopefully might be chosen to appear on his own website or blog. 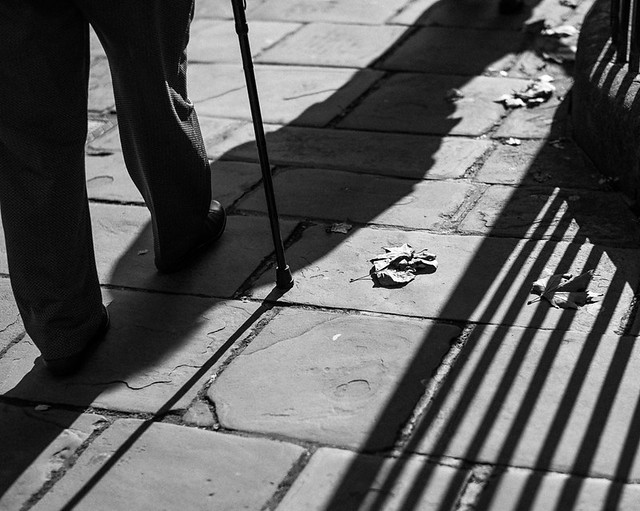 Street shadows
This photograph is all about the shadows and how the light is creating lines and shapes which I think work well as a composition. 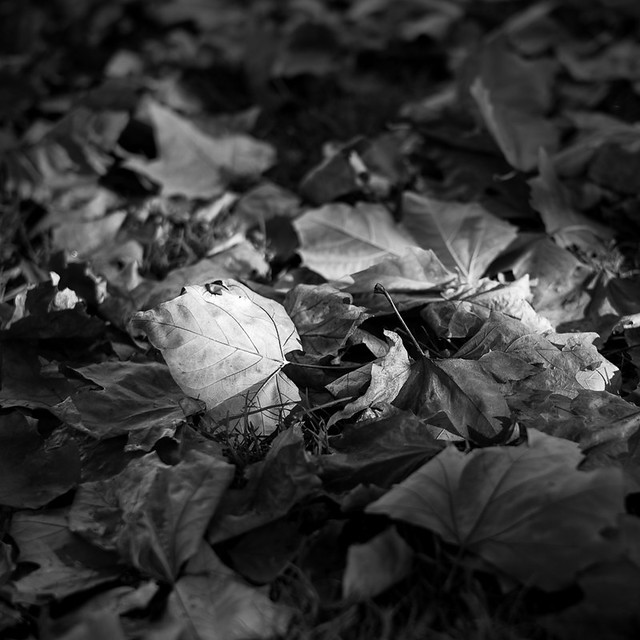 Autumn leaves
I have focused on the leaf which was catching the light and in processing emphasised the focal point of the image by darkening (dodging) the leaves around it. 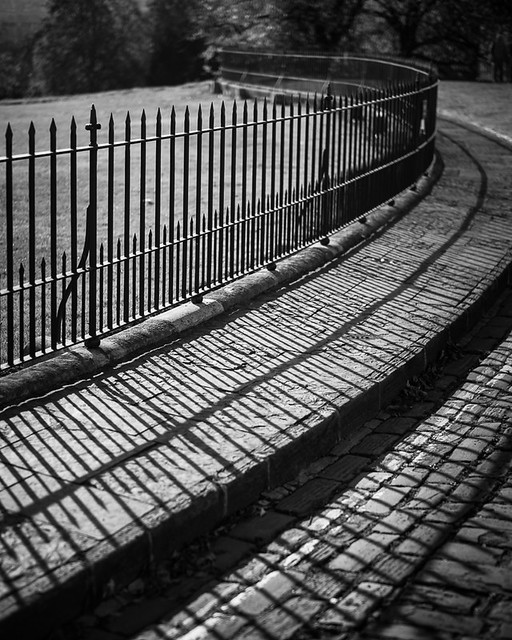 Railings
Taken in the Royal Crescent. The curvature in the railings, their shadows, the path and the cobbled road all work well together. The background is thrown out of focus, so its not a distraction. 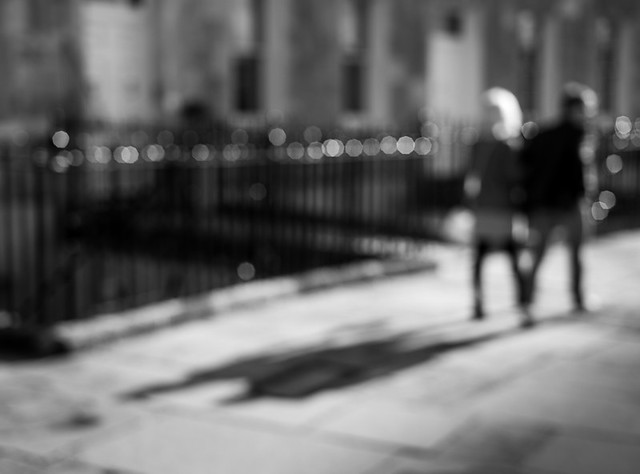 The couple
I took this shot in The Royal Crescent whilst experimenting with different aperture settings to control depth of field. I completely mis-focused but in its own way the result is still rather pleasing. 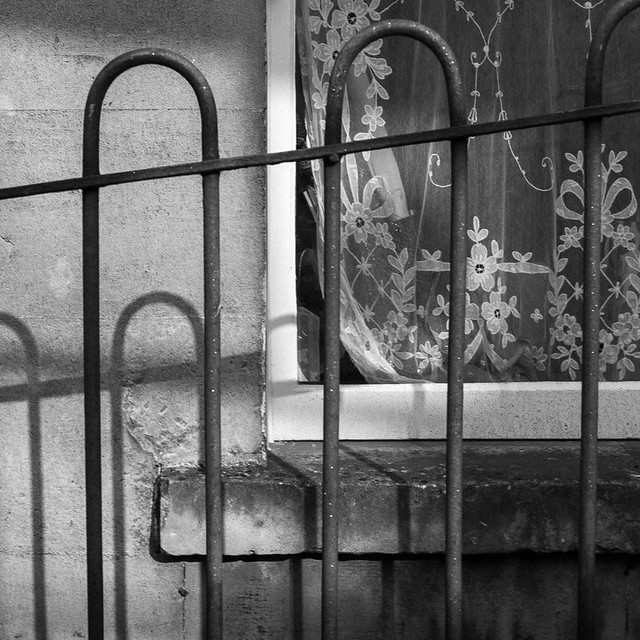 Lace curtain
Here I like interplay of the lace curtain, the railings, so typical of Bath, and their shadows on the wall. 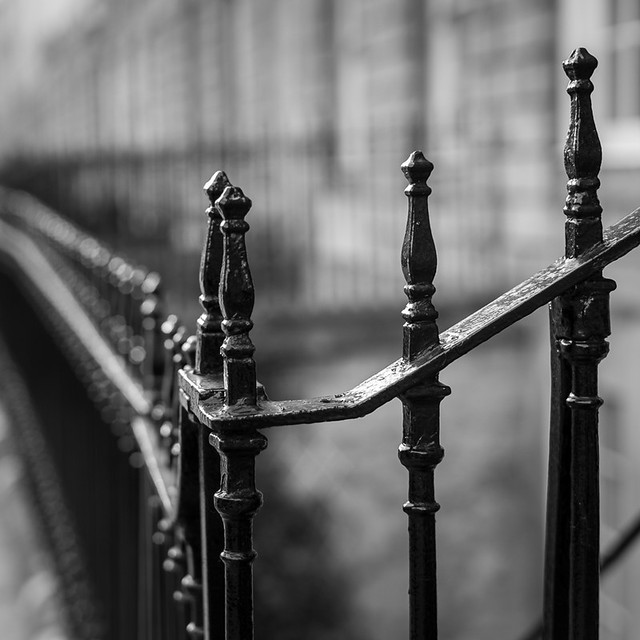 Bath railings
This photograph was taken with a large aperture opening, reducing the depth of field. I like the way the lens has rendered the railings and the buildings which are out of focus, but still have an important part to play in the overall image. 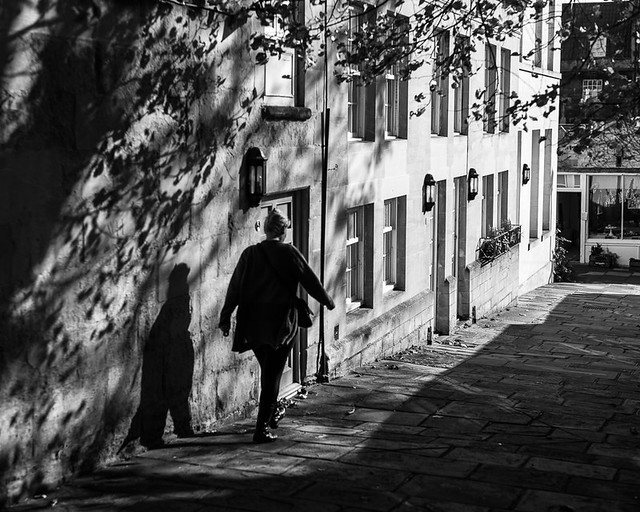 Walking in the light
There are so many little side streets in Bath, it would take a long time to get to know them well, but this one is rather pretty and the lady walking in the light brings life to the image. 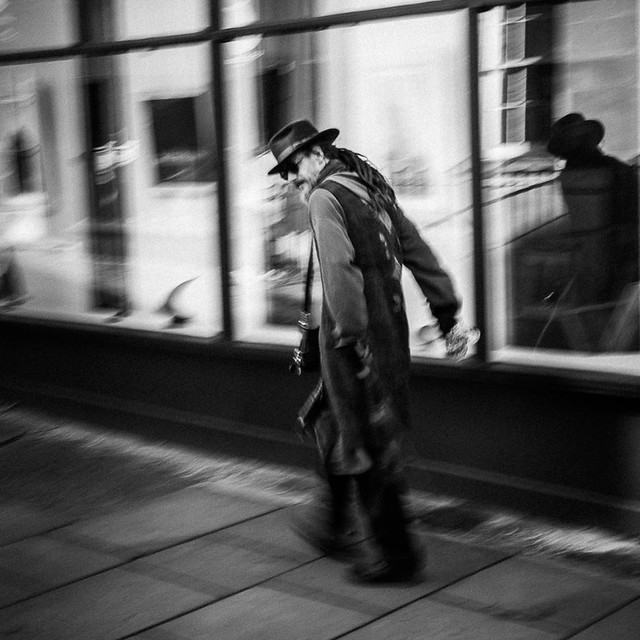 Mysterious character
This shot was taken on the fly. I noticed this interesting man walking along, so I lifted up my camera and pressed the shutter. I panned a little and the shutter speed fortunately added movement without losing detail. I particularly like his shadow and the reflection of the sash window on the right of the picture. 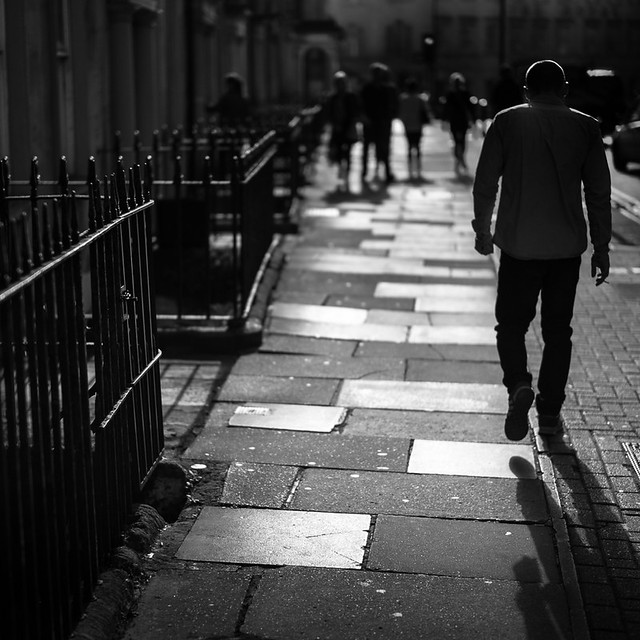 Into the light
Andy was keen that we all tried to take shots directly into the low sun. In this instance I have pre-focused a few feet in front of me and used a wide aperture, so the background is blurred. The rim highlights on the man are an essential ingredient. 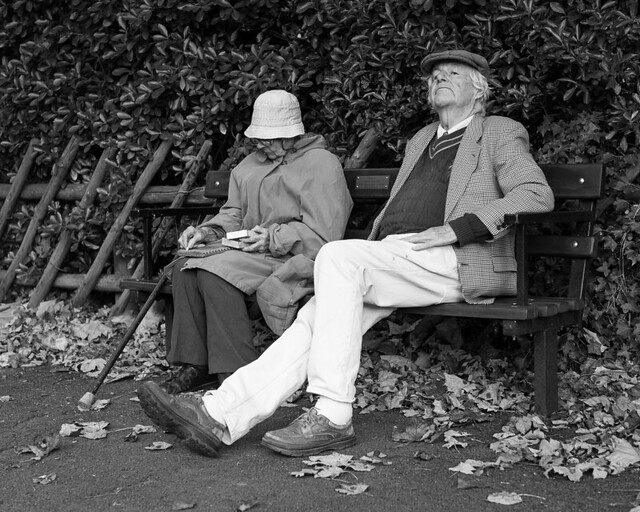 The artist and her husband
There is something which really appeals to me about this shot. It’s not staged but I did talk to the couple and asked for their permission to take a photograph as they sat in the park enjoying their retirement. This was the best of the half or dozen or so I took. They told me they are both artists. She is sketching with pastels whilst his expression, has character with patience, as he waits for her to finish her work. 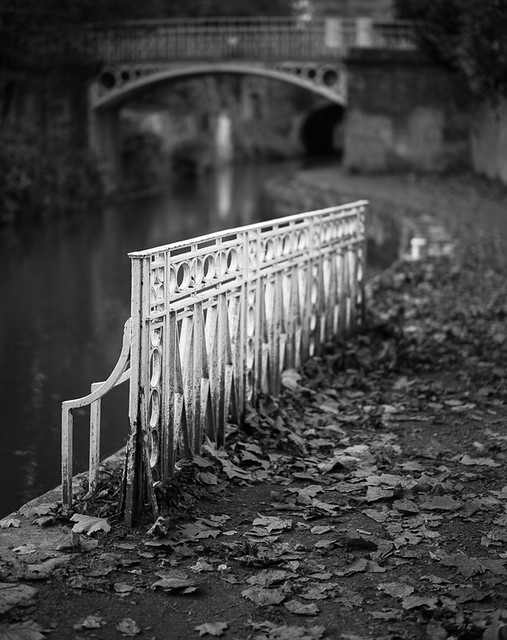 Alongside the canal path
This photograph illustrates what I was trying to achieve on the course, i.e. working with a shallow depth of field to emphasise the foreground interest but not to lose all the detail of the bridge in the background. 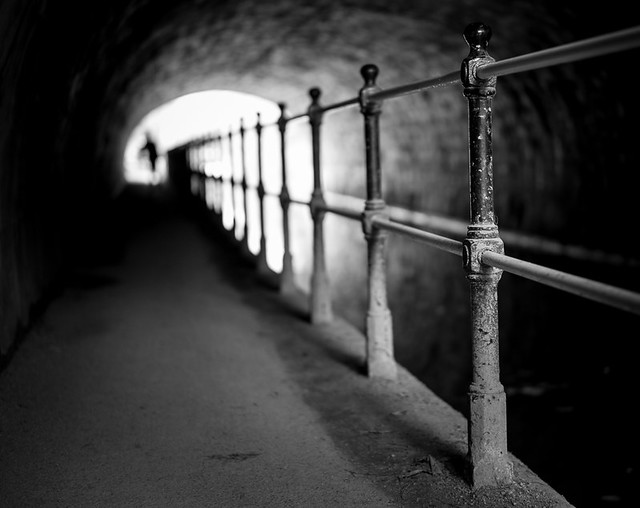 The tunnel
Like the previous shot, a wide aperture opening and focusing on the foreground interest. Exposure wasn’t easy with this shot but the highlights haven’t blown. The blurred figure adds human interest and draws the eye. 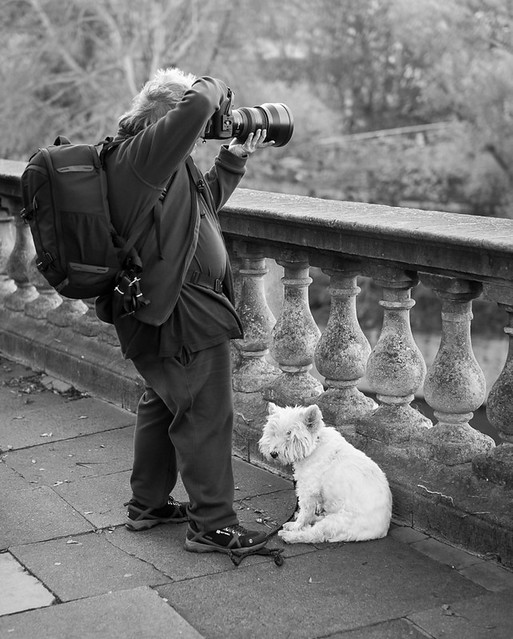 The photographer
This is not Andy, nor anyone in our group, but I couldn’t resist taking this shot of a photographer with all his gear and the ever patient ‘Westie’ for companionship .