Dunraven Bay is situated on the south coast of Wales in the Vale of Glamorgan. The bay itself faces west and is also known as Southerndown beach after the nearby village.

I visited this lovely coastline on a cold and windswept afternoon at the end of March. I was fortunate to find the tide was out, revealing the sands and rocks which make this such an interesting place to photograph. With the weather as it was there were only a few people around, just a handful of walkers and their dogs to leave their foot and paw prints in the sand.

I tried to imagine what it would be like mid summer, in warm temperatures and blue skies. The car park would be full, families would be enjoying the lovely beach, children rock pooling and building sand castles. The surf would also attract windsurfers and others who enjoy their water sports. For me though, I enjoyed the isolation, free to wander and explore, and take shots of anything which took me eye. Rarely did I have to wait for people to move out of the frame.

I hope you enjoy the selection of images shown below. To view a larger version click on the image and it will open in a new window. 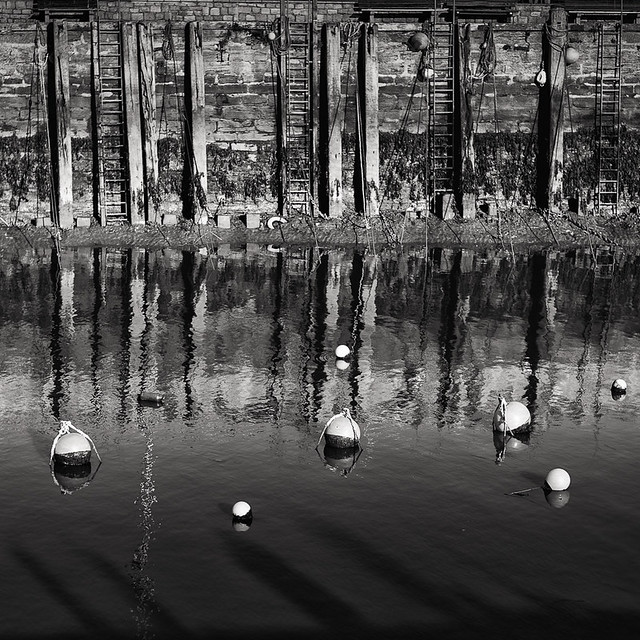 Harbour wall
It was low tide so the full height of the harbour wall was visible. I don’t know how old the harbour wall would be, but for many, many years, the water has risen and fallen with the tide, covering the old ladders, wooden posts and exposed brick and stonework. The buoys and reflections of the wall in the water, together with the wall itself I think make an interesting image.

Fishing harbours are wonderful photographic subjects, where the eye is inevitably is drawn to the fishing boats, clusters of old rope, endless rusty chains, small mountains of lobster pots, and piles of decaying painted wood – the list goes on and on.

Back in December when I visited the fishing village of West Bay on the Dorset coast (now famous as the back drop to the crime series ‘Broadchurch’),  I tried as hard as I could to avoid the obvious, which in this type of environment is a rather challenging thing to do. Whether or not I have succeeded is hard for me to judge but whatever the results, I spent a very happy hour or two walking around this most attractive location in relatively warm winter sunshine, with a camera in my hand looking for things to photographic. What could be better?!

END_OF_DOCUMENT_TOKEN_TO_BE_REPLACED

Swanage is a small seaside town on the Purbeck coastline of Dorset. Although I had been to the town before I had not seen the pier, so a quick detour to our journey seemed like a good idea, despite the fact that we would arrive mid afternoon and the light would be fading fast. There wouldn’t be a great deal of time for photography but in many ways the short stop was to see whether or not another visit would be worthwhile when I had more time. As we parked the car I noticed a ‘Trompe L’oiel’ on a derelict building opposite the pier. In the bottom right hand corner was this inscription. An omen perhaps?

All the photos were taken using the Olympus OMD EM5 and Olympus 45mm f1.8 prime lens.

As I walked along the pier I noticed that the vast majority of the wooden planks included a small brass plate with an inscription. In one or two cases a floral tribute had been left, probably on Christmas Day which only adds to the poignancy of the next two images.

There are many benches along the promenade looking out to the sea. On this particular bench was a pair of shoes and a single sock. I only hope the owner returned from his paddle, together with the missing sock, on what was a particularly cold day.

The magnificent trompe l’oiel I referred to at the beginning of this entry. The ‘photo opportunity’ inscription can be seen in the bottom right hand corner.

Swanage Pier is definitely a ‘photo opportunity’ and one I hope to return to in the not too distant future.

Through my work and therefore out of necessity, I visit the seaside town of Bognor Regis on a regular basis. Situated on the Sussex Coast I have to say its not the most glamorous of resorts. Nevertheless the very fact that I find myself frequently in the town or driving along its seafront, it does provide some excellent opportunities for photography.

The three images which make up this entry were all taken on different days and at different times of the day.

The first image was an early evening shot taken in September of this year with the Olympus OMD EM5. I had just acquired the Panasonic 45 – 200 zoom lens (second hand from a fellow camera club member) and as I had not used it before, I was keen to see how well it paired with the camera and to see the results it produced. Its not every day that the such a beautiful cloudscape will appear in the sky, so I was fortunate to have chosen a great  evening for its first outing.

The second image is what I might call a ‘grab shot’. Taken around the middle of the day I had been driving along the seafront when I noticed a rainbow to the north. If I was quick I thought, I could park the car, hurry down to the seafront and take a shot of the beach huts in the foreground with the dark clouds and the rainbow as a backdrop. Unfortunately rainbows go as quickly as they come, so by the time I got to where I wanted to be the rainbow had lost all its intensity, and seconds later was no more. Mildly disappointed at the missed opportunity I turned around and composed the shot below, which in my view was more than adequate compensation. The couple walking along was a bonus, as it takes your eye right into the image. The Olympus E-PL3 with 14 – 42 kit lens worked a treat.

The third and final shot was taken early in the morning just a few days ago. Again the cloudscape was the reason for stopping the car and getting out, but I knew some foreground interest was required. I walked down to the foreshore and captured the image below, again with the E-PL3 and kit lens.

A famous quote attributed to the photographer called Arthur Fellig, better known as Weegee, is ‘f8 and be there’. None of these shots were taken at f8, but the second element is certainly true!