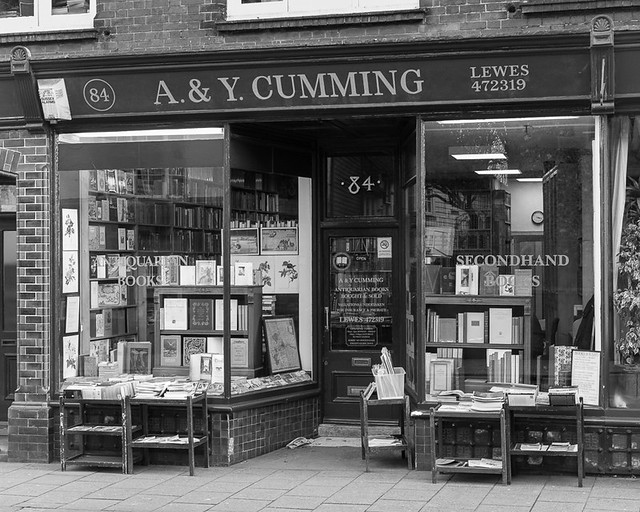 A couple of days ago I was in the lovely town of Lewes in East Sussex. My brief visit had nothing to do with photography, but I did have my camera with me. There wasn’t the time to explore the town, but I was struck by the number of secondhand bookshops there were.

In these days of Amazon and ‘online shopping’ etc, it’s rather appealing that a shop like this can still trade and survive. Even its opening hours are hardly 24/7. The sign writing on the door informs you the shop will open at 10am on weekdays and close at 5pm. On Saturday it stays open an extra half an hour until 5.30pm but not surprisingly it’s closed on Sundays. How very civilised.

The sign writing above the door is old fashioned, but befitting of what’s on sale. The telephone number simply says Lewes and does not display the area code, so you would have to know what this is if you wanted to ring the shop from outside the area. It’s all very quaint and says a lot about Lewes as a town. Yes, it has a large Tesco superstore, a Waitrose and other well known shops, plus a number of independents, but none of these has the charm of a Antiquarian and Secondhand bookshop which harks back to another era.

Long may shops such as these continue to exist and thrive in the future, helping to preserve a little bit of history in the process.

There are two widely known University towns in England, one being Oxford, the other Cambridge. Although I have visited Oxford on a number of occasions, I can only recall having been to Cambridge once before, and this was many, many years ago for reasons I can no longer remember. It certainly wasn’t to further my academic education! So when my wife and I were invited to visit some distant relatives for lunch, it gave us the opportunity to look around the town for an hour or two before returning home. It was a Saturday afternoon so the lovely streets, lined by some beautiful college buildings were packed with students, shoppers and visitors, who were all enjoying the early summer sunshine.

There was so much to see and we only scratched the surface, conscious of the fact that a three hour drive lay ahead of us and it had already been quite a long day.

Without question it’s another town to add to the ever-growing list of places to revisit, explore and photograph, but for now here are small selection of images which say something about this rather special University town.

All the images were taken with the Olympus OMD EM1 and Panasonic 12 – 35mm f2.8 zoom lens. A great combination when you want to ‘travel light’ and have a versatile set up ready for most photographic opportunities without compromising on quality.

Back in November we visited Playa Blanca in Lanzarote, one of The Canary Islands for some winter sun and warmer temperatures. We only had one day of rain, the rest of the time we relaxed under clear blue skies and temperatures in the mid to high twenties.

The light was very special particularly at the beginning and end of each day, and having never visited this part of the world before, it was an opportunity for me to try an alternative approach to my photography. Still working in black and white I looked for details in the buildings around where we were staying. Observing the way the light fell on the textured wall surfaces and the shadows that were cast. Simplifying the image through abstraction and including some geometric shapes to enhance the composition. The white walls often worked as giant reflectors projecting light in areas where you would least expect it to be.

Here are a selection of images all of which were taken within a five minute walk of the villa we had rented for the week.

For me these images capture the feel and essence of the resort, the wonderful light as it played on the textured and buildings, but more importantly it was a lesson in observation and I greatly enjoyed the experience.

Since November of last year the National Maritime Museum in Greenwich, London has been staging a retrospective exhibition of work by Ansel Adams called ‘From the Mountains to the Sea’. As it was due to finish this month I did not want to miss the opportunity to see original photographs by this inspirational artist. So a day trip to the Capital was planned which also gave me the chance to take in some of the sights of London and of course take a few photographs.

Before heading off to Greenwich I also visited another photographic exhibition at Somerset House called ‘ Landmark – The Fields of Photography’. From there I walked eastwards along The Embankment towards St Paul’s Cathedral, The City of London and the Financial Sector. At Tower Bridge I used the Docklands Light Railway to Cutty Sark, the nearest station for The Maritime Museum. I very much enjoyed seeing areas of London which I had not visited before and here are a slection of images I took that day.

I also wanted to try my hand at some abstract geometric compositions of the the modern office blocks which are now starting to dominate the London skyline.

……..and finally an older couple walked hand in hand up the ramp leading to the Millennium Bridge. I assume they too were enjoying the sights and sounds of this remarkable city.

I realise it’s been a few weeks since I posted an entry on this blog. The reason is quite simple. A couple of weeks ago I visited the Lake District for a few days in the company of Paul Gallagher, a renowned UK based landscape photographer who just loves black and white. He is also a Master Printer for Epson; so what he doesn’t know about printing just isn’t worth knowing! It’s also been a very busy time for me personally and I wanted to reflect on what I had learnt before posting my thoughts and any of the images.

The photograph below was taken on the day I arrived in The Lake District before I met up with Paul the next morning. It was late in the afternoon so I had a limited amount of daylight left to take any shots. Blea Tarn was frozen over and I processed the image using a combination of Lightroom and Silver Efex Pro2. As it happens I would not using this plug-in again for post processing…..Paul was about to demonstrate to me the power of Photoshop……so more about this in a future post!

The setup for the 121 or personal workshop was to spend two days out and about taking images, learning about camera technique, camera settings, composition, histogram and the use of filters etc. The third day would be spent back at his studio processing the images and producing large A3+ size prints. In essence I was keen to bridge the gaps between camera work in the field, processing and printing. In other words to develop a work flow whereby my photographic thinking or pre-visualisation at the time of taking the shot would be influenced by how I wanted the final image to look once processed and printed back in the ‘digital’ darkroom. The aim would be to combine the three elements into one, as opposed to treating them as distinctly separate processes where coherent thinking doesn’t overlap.

This will therefore be the first of a series of probably quite short posts about the various topics which we covered over the three days, including of course, some of the images taken. I should add that I had an extra day free in the middle of the 121, which gave me time to put into practice some of the techniques and ideas we had talked about in the first two days. In my opinion this was invaluable, as I could take some shots unsupervised by Paul before returning to his studio. He also set me a few challenges…..would I succeed or would I fail?