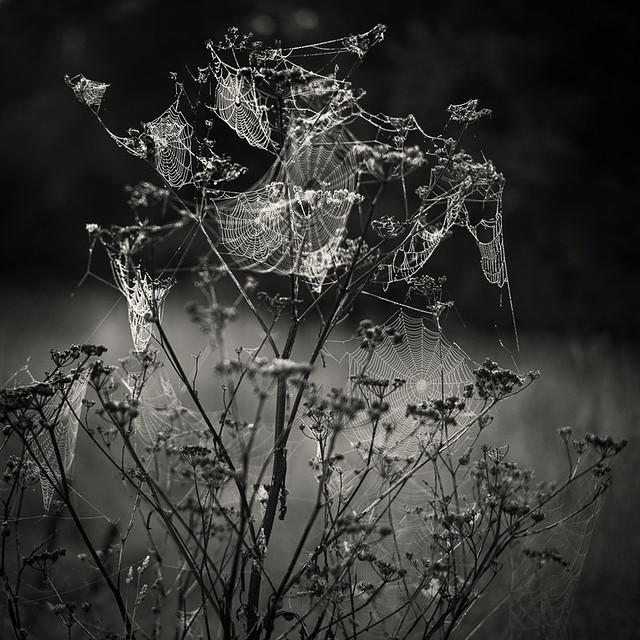 From a very young age I always remember the saying – ‘Oh what a tangled web we weave, when first we practice to deceive.’ Whilst I have always tried to live my life accordingly, its relationship with the image is quite simply the fact that it was the first thought that entered my mind when I took the shot at the end of October. The cow parsley was absolutely covered in cobwebs, woven in amongst the drying flowers and stems. The dull and damp morning added another ingredient. Poor lighting but I knew I could add contrast in post processing.

Focusing and composition was a challenge, but I was more aware of the background and how it affected the overall appearance of the picture. I didn’t want it to be in focus, far from it, but I did want it to compliment the subject and provide the contrast necessary so that the cobwebs and lower stalks were clearly visible. The dense backdrop of trees provided the dark upper layer and the grasses in the field the paler lower layer.

This photograph may not be to everyone’s tastes, but it is very much a feature of the countryside in the autumn.

Tangled web yes, deceitful no; just testimony to the creative talent of the humble and sometimes scary spider!

6 Responses to “Oh what a tangled web we weave…..”

‘Straw bale barn’ Continuing a series of rural images of Dorset - #closetomybackdoor
I have been posting a series of images recently all of which have one thing in common. They are all ‘close to my back door’. Whilst the majority are landscapes, I also intend recording details within the landscape. Rural documentary images which so appeal to me. A photographic project which will continue.
‘Edge of the field’
‘Rural light’ I so enjoy the light and the drama to be had in the sky at this time of year. #landscape
‘Tractor Store’ Farmers are not renowned for keeping their buildings in good repair. This partially collapsed tractor store is a case in point.
‘Back of the farm’ Towards the end of the day as the sunlight falls on the old farm buildings. #landscape
Follow alan frost photography on WordPress.com