During our recent stay on the west coast of Devon, close to the borders of Cornwall, we visited the village of Hartland. It’s a rather quaint little place and for the most part unspoilt, which I rather liked.

It had very few shops but one which did attract my eye was ‘M. O’Donnell & Sons’. In the left hand window there was a small selection of fruit and veg, whilst to the right there were some woollen hats, a knitted scarf, a few buttons and other items of haberdashery for sale. The notices in the door were up to date – Not to be missed, the ‘Strawberry Tea’ which was coming up on the 1st July. There was no state of the art spotlighting, just a couple of bare light bulbs and a small fluorescent tube to illuminate the interior of this double fronted shop. The bay windows were in a poor state of repair, and everything including the sign above the door needed a fresh lick of paint. Had it been in pristine condition it would not have had the  character or the appeal which enticed me to take a photograph in the first place.

It made me think that in its time it would have been the ‘local superstore’ of its day, selling a variety of things which you probably couldn’t easily buy elsewhere in the village.  Local residents would have been eternally grateful to the O’Donnell family, as this little shop would have prevented a long journey into the nearest main town. I don’t know, but perhaps the present community feel the same way and continue to support the shop, after all it would be rather sad to see it close, wouldn’t it?

Do click on the image to see a larger version, only then will you be able to see some of the items for sale in the windows.

I love the way this tree has been shaped by the prevailing wind.

The branches appear to be reaching out, as if they are trying to grab hold of something, just anything, whilst the invisible roots grow deep and long, clinging to the earth below, preventing the tree from being torn out of the ground when the next wind blows.

To view a larger version, please click on the image which will open in a new window.

This is the very first entry of my new ‘Churches Project’ and the honour goes to The Church of St Andrew, Sutcombe in Devon. It has Norman origins but is principally a 15th Century granite structure which was restored in 1876. It forms part of a small and quite remote village about 5.5 miles north of the town of Holsworthy.

For me the church interior offers greater appeal than its exterior. As you enter the south facing entrance porch, look up and you will see the medieval wagon roof; the age and character of the building becomes immediately apparent. 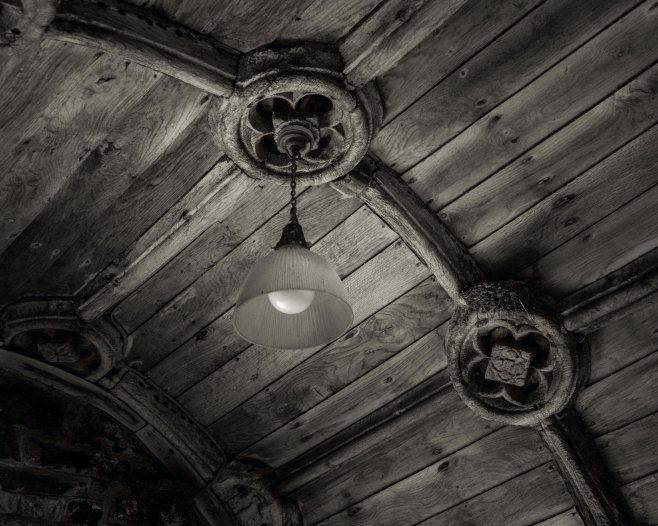 Inside the church itself, one of the first things you notice are the superbly carved bench ends dating back to the early 16th Century, many of which depict heraldic devices of local families. These complement the rood screen which separates the nave and the chancel and can be seen in the first image at the top of this post. Is it any wonder St Andrew’s has a Grade II* listing. 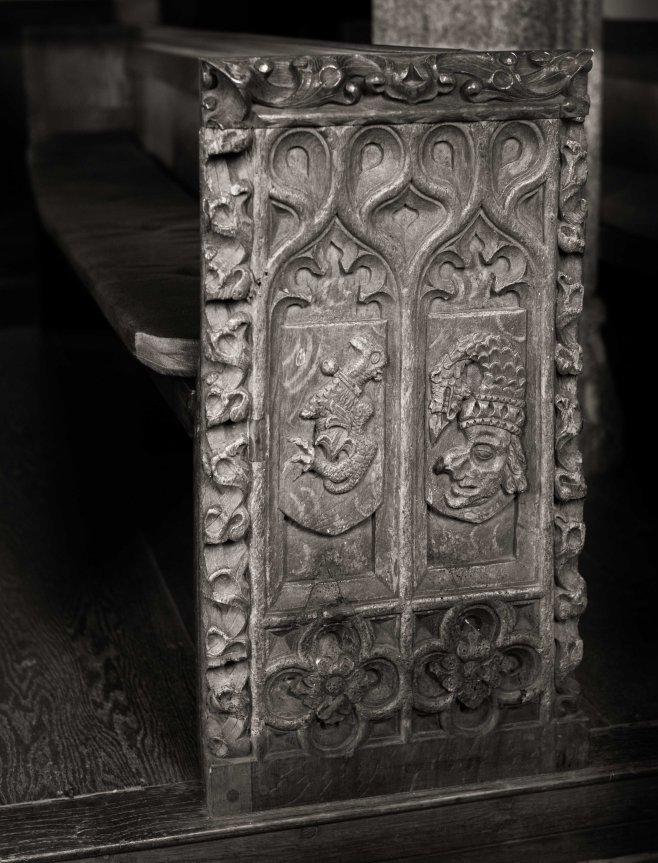 In contrast to the carved bench ends, there are a collection of more modern pew chairs with a cross back, which from a photographic point of view are just as appealing. 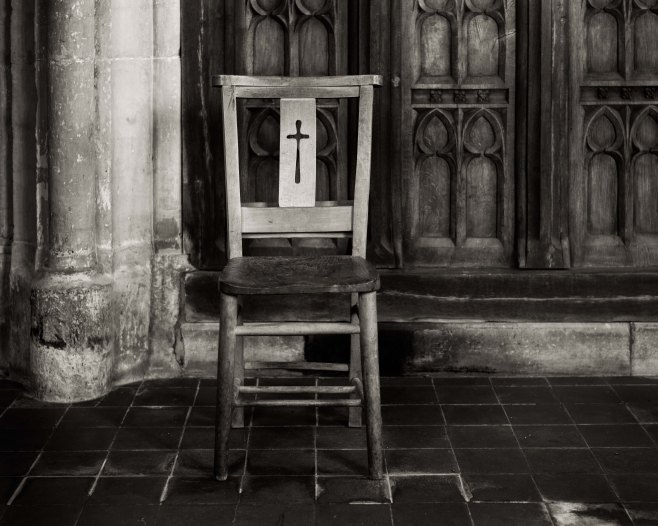 This is certainly true when some rays of sunshine highlight one of the chairs hidden in the rear corner of the church which has a broken rear leg and woodworm is also evident. 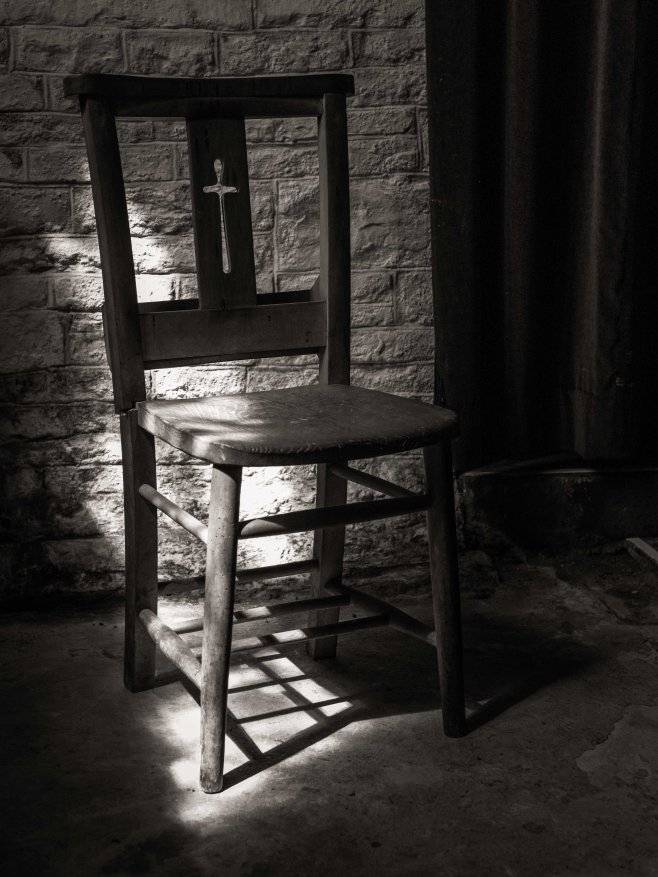 The exterior shot of the church was captured using a 28mm lens. I could only just get far enough away to include all of the building which has made me think a wider angle, perhaps a 21mm would be useful  in the future. 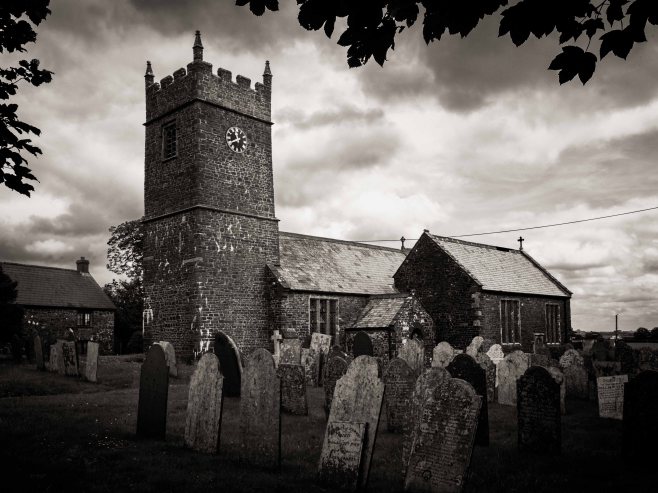 To see a larger version of the featured image click on the thumbnail below, or click on any of the images and they will open in a new window.

More information about my ‘Churches Project’ can be found here. 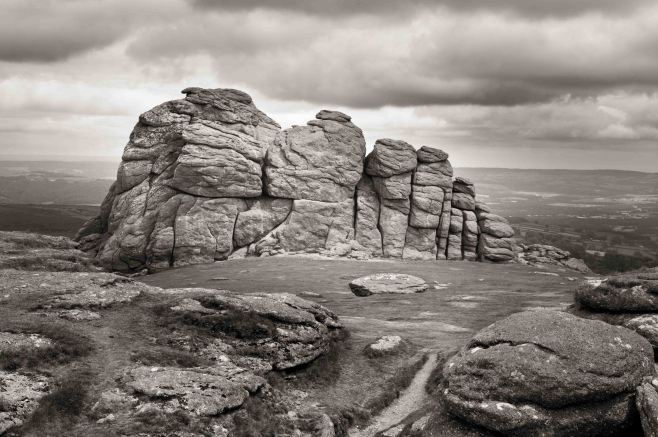 I recently came home from a very enjoyable and relaxing family holiday on the borders of Devon and North Cornwall. On the return journey I wanted to take a small detour and visit the town of Bovey Tracey, which lies on the eastern edge of Dartmoor National Park, and more specifically to go and see the granite outcrop of Haytor. This is perhaps the most recognisable and accessible of all the Dartmoor Tors, so on arrival I was not surprised to find a visitor centre, car and coach park catering for the tourists. Fortunately the weather was inclement and the number of people clambering up the relatively easy hill to reach Haytor were few.

I wanted to return mainly for sentimental reasons. I have fond memories of family holidays in this part of Devon when I was in my mid teens, some forty plus years ago (take large gulp…… and ask how is that possible?) and had not been back since. Life moves on and sadly both my parents and my sister have all passed away in the intervening years. My wife stayed by the car to photograph the very tame Dartmoor ponies and I walked up the hill with my grown up daughter and our dog.

I was pleased that the rocks of Haytor were just as I had remembered them; exposed to the elements but to my eyes nothing had really changed. My memory of Haytor is now as it was when I was a teenager. Still proud and strong, still dramatic and still commanding spectacular views of the surrounding countryside. It felt good to be back experiencing this great location with my own family and for a few moments to stand quietly, touch the stone, and reminisce about past times.

It was also good to be reminded that some things change and some things remain the same, which is just as well, as we all need a ‘rock of stability’ in our lives.

For quite some time I have been considering undertaking a photographic project but have lacked inspiration – until now.

Some months ago I read two very good books; one called ‘On being a photographer’ by David Hurn in conversation with Bill Jay; and another entitled ‘The Essence of Photography’ by Bruce Barnbaum, both of which I can highly recommend. Each publication talked about the benefits to be derived from working on a project, whether small or large, and irrespective of the time it might take to complete.

In ‘On being a photographer’ the author writes – “The subject matter you select must; a) fire your enthusiasm and curiosity at least for the length of time it will take to produce a meaningful body of work; b) lend itself to images, as opposed to words and; c) remain continuously accessible so that you can return time and again to the same topic whenever you wish or have the time.

From the same book it reads – “The more the shooting, the greater the enthusiasm and knowledge for your subject. The greater your knowledge, the more you want to do it justice and this increases the scope and depth of the pictures. So the process feeds on itself”.

Committed to the idea that I would like to start a project, but not knowing what it might be, I was recently inspired by a famous book called ‘Betjemans Best British Churches’ to visit and photograph a number of churches listed during a recent holiday in Devon. I soon realised that I would often photograph these buildings and their locations whenever the opportunity arose, but I had never thought of it as a project.

The penny has finally dropped and whilst this work will not be at the expense of making images of other subjects, it will give me a sense of direction and purpose. There are about 2,500 churches in the guide so I will not be short of material. Some are close to home so easy to visit in a day; others I can research and look forward to visiting as travel and holidays permit. Interiors are just as important as the exterior, so I am not entirely dependent on the weather. Landscapes are my other great love, so visiting a church will take me to new areas as well.

Inspired, excited and full of enthusiasm I have created a new section on this site, not surprisingly called Churches Project . Do read  the introduction and by way of a start I am pleased to show a photograph of one of the churches I visited in Devon in this post.

The Church of St Nectan is in the hamlet of Stoke in the Parish of Hartland. It is often referred to as the Cathedral of North Devon. I like the fact that the tower, which was built as a landmark for mariners, is partially obscured by low cloud and the way the cluster of daisies in the foreground appears to be replicated by the lichen on the gravestones.