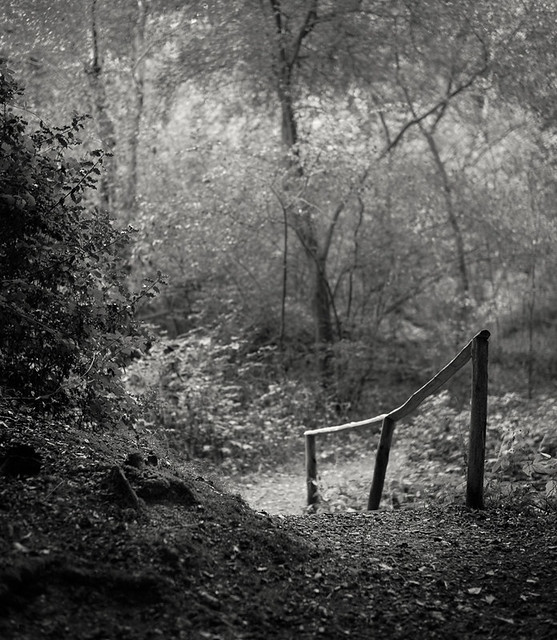 Up until the summer of this year I had never used a 35 mm full frame digital camera, nor such a fast lens. This all changed with the arrival of the Leica M Monochrom and a Leica 50mm f1.4 Summilux lens. I am only just beginning to appreciate the creative possibilities of this combination.

This image was taken back in September in a wooded copse fairly close to my home. I was largely experimenting at this time and took the shot wide open (f1.4) and focused on the near post of the hand rail. Even though this post was some distance from where I was kneeling, the plane of focus is very narrow. Only the leading edge of the path and the branches of the small holly tree to the left are in sharp focus. Checking the depth of field chart Leica provide for their lenses, at a focusing distance of 5m at f1.4, the depth of field is only 4.6m to 5.5m. i.e less than a metre before things are no longer sharp. This means two things – focusing is critical even on a subject which is not that close to you and secondly and more importantly, the careful selection of the focusing point can greatly influence how the image is rendered. It becomes a creative choice just how much or how little is in focus. I like that!

Had I used my Olympus Micro 4/3rd’s camera with the Panasonic 12 to 35 at 25mm (50mm in 35mm sensor terms) and set at its widest opening of f2.8, the equivalent ‘full frame’ aperture opening would be f5.6 because of the crop factor. As a consequence I suspect all of the handrail would have been in focus, together with the foreground. The background trees may have ‘softened’ a little, but I think the appeal of this picture is how the background is very soft. Call it ‘bokeh’ if you like but it adds depth to the image which would be lost if everything was in sharp focus.

There was very little light when this shot was taken. Not only did I use a fast aperture, the ISO was set at 2000 and this still only gave me a shutter speed of 1/750, so that I could happily hand hold the camera.

As I grow in confidence and develop a greater understanding of how best to use a shallow depth of field I think f1.4 might fast become my favourite aperture setting.