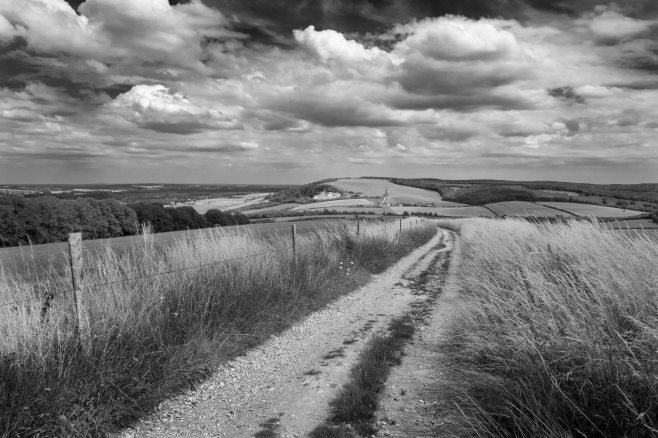 For the past 18 months or so much of my photography has centered around the coastal area of Chichester Harbour. Having a specific and long term project to concentrate the mind has been something of a revelation to me. I have always been inspired by other photographers and artists who have chosen a subject to work on over a sustained period of time. The intimate knowledge gained by exploring a defined area and the benefit this brings to a body of work is, I have now discovered, hugely rewarding.

After much consideration I have decided my next project will cover an area of the South Downs National Park which lies to the north of the city of Chichester. It’s the area most accessible from my home; the southern boundary being no more than 10 minutes drive away. It’s a great advantage to be able to visit an area on a regular basis, daily if time permits. Reacting quickly to changes in the weather and the light because you can, is likely to make the difference between capturing a particular shot or missing an opportunity altogether.

The project map covers an area of about 30 square miles. The principal area I want to explore is defined by the red boundary – Area 1, as it includes a section of the South Downs Way, marked in blue. In addition to the chalk downland landscape, there is a variety of rich woodland and farmland, both arable and dairy. In addition there are a good number of pretty Sussex villages on the periphery of the area. Country churches and pubs will definitely form part of the project. Area 2 – marked in green, has always appealed to me so I decided this should also form part of the project. It includes Kingley Vale Nature reserve with its famous ancient yew trees and the charming four ‘Marden’ villages.

It perhaps goes without saying that the South Downs provides some great walks, not just along the Way itself but the many footpaths, bridleways and country lanes that link together. Many of them are already familiar to me, (in fact I walked the whole of the South Downs Way – 100 miles – back in 2013) but I don’t feel I know the area as well as I would like, particularly from a photographic point of view. The intention is to explore as many paths and lanes as possible, mainly on foot but occasionally I might resort to a bike or car if I need quicker access to one particular location.

My plan is to pick at least one day a week when I sling the camera bag over my shoulder, wear and take appropriate clothing, plus a drink and a light snack for lunch. I shall head off for the day and just photograph what draws my attention. I will make notes of places I wish to revisit, trying to pre-visualise a shot when the light and weather are likely to be right.

Slowly but surely I intend to build a body of work which is more than likely to contain smaller projects of specific locations, subject matter or even events, for example at West Dean College or the Weald and Downland Museum in Singleton. Whilst I expect the vast majority of photographs to be in black and white, I have not ruled out the possibility of some colour images when relevant. Nor will I exclude photographs captured from my back catalogue providing of course they were taken within the defined area. In essence I don’t want to pre-define the end result. At this early stage I would prefer to see how the project develops in the coming weeks and months.

I know that my photographic style has evolved since some of these photographs were taken back in 2013. This is partly due to the fact that the camera and lenses I am using has changed quite significantly. The switch from an Olympus micro four thirds to a Leica Monochrom ‘full frame’ rangefinder with prime lenses a few years ago has opened the door to more creative ways of working.

I plan to exhibit photographs from this project in the future, as well as producing another portfolio (similar to ‘Still by the Water’), and quite possibly a book; but these are all topics for another day.

I am very excited by the prospect of what this project has to offer. If nothing else it will help to keep me fit even if I do stop off at one of the many inns for a quick pint and a pie! Call it a resolution for the New Year if you like, but I fully expect this to keep me well occupied not just in 2018 but well into 2019.

Whether you are a photographer, artist, writer or follower or simply someone who has stumbled across this page on my website, may I finish by wishing you a peaceful, healthy, happy and creative New Year.